Old and cold: Philly seniors deal with lack of heat 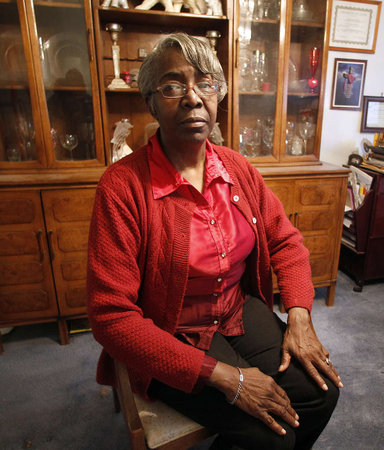 JUANITA UPSHUR, 70, doesn't live in an igloo. But for a week in January, the West Mount Airy resident felt as if she did. “It's ice-cold,” she said at the time. “You need a coat if you want to go visit somebody in another apartment.”

Dorothy Henry, 70, and her husband, Norman, 72, were without heat for three weeks in February. A broken furnace and disagreements with contractors took their toll on the Overbrook Park couple, who said the cold amplified their health problems.

Upshur and the Henrys are among dozens of Philadelphia seniors who, according to authorities, have struggled with a lack of heat during some frigid days this winter.

The winter saw an increase in the number of elderly city residents without heat. In the last year, more than 150 seniors with heating issues were helped by the SeniorLAW Center, according to Karen Buck, executive director of the nonprofit agency at Broad and Chestnut streets in Center City.

The issue is particularly serious for the one-in-five seniors in the city who live at or below the poverty line, Buck said.

“This has been a very hard time for folks over the last several years,” Buck said. “There's a whole population of newly poor older people. Even younger older people who may have lost their jobs and may not be able to find new jobs, or who are just really struggling with all the other costs of living. This is a very harsh winter for folks.”

Buck said the bitter weather presents a different set of challenges to some seniors who already may have physical, emotional or mental difficulties.

For four days until Jan. 26, Upshur said, her senior-apartment complex, New Covenant Manor, on Germantown Avenue near Gowen, was without heat while outside temperatures hovered in the mid-20s.

“I have physically not recovered from that bout of being cold,” Upshur said Wednesday. “I have rheumatoid arthritis, and I've been in pain ever since.”

A spokeswoman for Interstate Realty Management, which manages the affordable-housing complex, denied that any residents were without heat that week and said the firm has since addressed the complaints.

But Upshur said she and other elderly residents were not out of the woods. “If the temperature drops like that again, that means that same problem is going to reoccur,” she said.

Dorothy Henry said the frigid weather “has exacerbated” her health issues, which include a heart stent and lupus. “My lupus affects my lungs, my heart, my major organs,” she said. She's seeing a pulmonary specialist to address new breathing problems, she said.

After protracted disagreements with contractors, a new heater was installed for the Henrys last Thursday. But the couple still feel the effects of their time in the cold. Dorothy said her husband experienced prolonged stiffness from his recent hip replacement.

The Henrys fought the cold with a small space heater and by boiling water on the stove, she said. The steam, Henry said, helped keep the house bearable, but those efforts came with their own set of problems: Henry said their gas bill was more than $500.