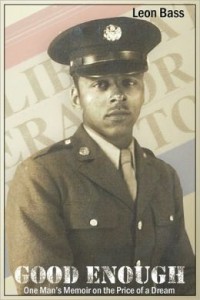 SeniorLAW Center is delighted to honor Dr. Leon Bass at its 2014 gala, Honoring Our Older Veterans, on May 21, 2014 at the Ballroom at the Ben.  Dr. Bass served in a segregated U.S. Army unit in World War II, and was among the first American soldiers to be seen by – and to see —  survivors of the camp.  Bass later referred to the people he saw that day as “the walking dead.”   In the years following the war, as did many soldiers, he tried to repress his memories of the horrors that he saw there.  But in the 1960s, now a teacher and Civil Rights activist, he met a Holocaust survivor and felt moved to declare to his students, “I was there, I saw.”

After the war, Bass graduated from West Chester University of Pennsylvania and then earned a doctorate at Temple University. He taught at the Benjamin Franklin High School in Philadelphia and became Principal there, a position he held until 1981.  He later taught history at George School in Newtown, Pennsylvania.

Since that time, he has spoken widely on racism and The Holocaust, bringing his unique perspective of oppression.  He was a participant in the International Liberators Conference in 1981, and in 1994 gave the keynote address at the Georgia Commission on the Holocaust.    He was awarded the Pearlman Award for Humanitarian Advancement from Jewish Women International in 1996 and he appears in the Academy Award-nominated Documentary “Liberators: Fighting on Two Fronts in World War II.” 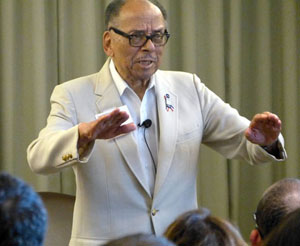 SeniorLAW Center is honored to select Dr. Bass as our 2014 Champion of the Year.  His service to our country and work to lift others from devastation, poverty, racism and injustice is a brilliant reflection of SeniorLAW Center’s mission.