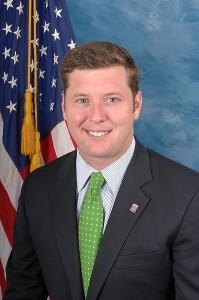 SeniorLAW Center is delighted to announce that veteran and former Congressman Patrick Murphy will serve as Master of Ceremonies for SeniorLAW Center’s 2014 Gala, Honoring Our Older Veterans.

Patrick is a decorated Iraq War veteran and advocate for veterans’ rights. Patrick served two terms in the U.S. House of Representatives and currently hosts “Taking the Hill” on MSNBC, a special program dedicated the “issues affecting the veteran community as they navigate their postwar lives.”  During his congressional career, Patrick represented over 700,000 constituents from Pennsylvania’s Eighth Congressional District in the U.S. House of Representatives for two terms, serving on the Appropriations, Intelligence, and Armed Services committees and championing equality by authoring the bill repealing the “Don’t Ask Don’t Tell” policy. He also coauthored the 21st Century GI Bill and Hire Our Heroes legislation for his fellow veterans and was instrumental in helping make the Washington Crossing National Veterans Cemetery a reality in 2008.  Patrick was commissioned as an Army officer through the King’s College Army ROTC program and is a graduate of the Widener University School of Law. He served as an assistant professor teaching constitutional law at the United States Military Academy at West Point and has lectured globally, including the U.S. Air Force Academy, the Air Force War College, the Federal Reserve Bank, and the Institute for Humanitarian Law in San Remo, Italy.  Immediately following 9/11, Patrick served two overseas deployments – Tuzla, Bosnia in 2002 and Baghdad, Iraq in 2003-04, where he earned the Bronze Star for Service. Patrick is currently a partner in the Philadelphia office of Fox Rothschild.